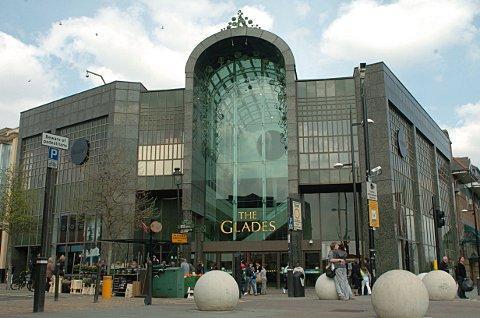 The Glades has been at the centre of Bromley’s universe since the shopping centre opened in 1991 – many of us won’t remember a time without it being there.

And as shopping trips go, The Glades generally has a good selection of shops which are perfect for a spot of retail therapy without all the hassle of having to travel too far out of the borough.

I’ve been making sporadic trips here since I was a kid, but if you take a closer look at the finer details of the shopping centre, is it really all that great?

Well, I took a trip to The Glades, avoided buying any clothes from H&M, and turned all my attention to checking out what the whole shopping centre has to offer.

As some of us may know there are two entrances/exits to The Glades, one on Widmore Road and the other on Kentish way, which is great as it avoids one area getting overly busy.

I drove into the car park at Widmore Road without any wait at all and blissfully cruised to the top level to find a space.

When I arrived I was surprised at how many spaces there were available, it was Friday mid-morning so I did expect some waiting around but it was a breeze. Straight into a space and off into the shopping centre I went. Lovely.

I glided down the escalators and as I looked down I was amazed. I couldn’t believe my eyes. There was a bowling alley in the middle of all the shoppers.

Inside The Glades
It always seems clean but if you look a bit closer at the floor it could do with a revamp.

It is spotless in terms of cleanliness, however, it looks dated and for a modern shopping centre it needs a little updating.

The different entrances and exits to The Glades means it is easy to get out onto the High Street, into Queen’s Garden’s and The Pavilion leisure centre – if you fancy a dip in the swimming pool before hitting the shops.As I strolled around the upper level I noticed there are currently a few empty units, which is sad because the place has so much potential.

It’s home to many popular retailers including Marks & Spencer, Debenhams, New Look, H&M, The White Company, Disney Store and there’s even a new Choice designer store which has already been popular with shoppers heading to Bluewater.

The empty shops make the whole place feel rather bare and with the lack of restaurants in The Glades, I think the empty units would make a brilliant home for shoppers to dine in and relax.

There also used to be a food court on the lower ground which I think they should relaunch.

The empty stores in The Glades makes the place feel bare (Image: Angie Quinn)
Next I walked along to McDonald’s to see what chaos was going down during the morning rush.

I must admit it was the most civilised and stylish McD’s I’ve probably ever seen. There was people enjoying their food, no rubbish had been left on the tables, the staff said hello and the decor was swanky.

I even stopped to enjoy the peace over a latte.

McDonald’s at The Glades Bromley is so stylish and clean (Image: Angie)

What did I make of the The Glades?
I’m a fan of the shopping centre. The place deserves a revamp, including an upgrade to some decor such as the flooring, and I’d like to see the empty stores filled quickly to bring in new shops or places to eat.

It cost me £1.10 to park my car for less than an hour which was reasonable but I always think shopping centres should be free parking. We spend enough money in them.

The Glades was a pleasant experience and definitely worth a visit. Although I got more than I bargain for.

The places in Bromley where you’re most likely to be a victim of violent crime
As I walked outside to admire the view of The Glades and to take a photo on my iPhone for the purpose of this story a counter terrorism police officer questioned me on why I was taking a picture on the High Street.

This was very awkward. I had to show my press pass to justify my motive for being in the area.

Let’s say I got some very strange looks when they moved on.

I think the Met Police are doing an astounding job patrolling our streets of London. I guess if they’re dedicated to keeping shoppers safe it makes it even more of a reason to shop at The Glades.

In courtesy of My London.news