A murder suspect was talked down from a roof then tasered after a 51-year-old man was stabbed to death in Bromley last night.

Police were called to Widmore Road around 10.50pm on Tuesday, September 14, following reports of a stabbing, attending with both ambulance and air ambulance crews.

The male victim received emergency medical treatment at the scene, but was sadly pronounced dead 11.56pm.

His next of kin have been informed.

At around 3.30am this morning, police were called to concerns for the welfare of a man on the roof of an address in Burnt Ash Lane.

Officers attended and engaged with a 29-year-old, who later came down.

A taser was deployed and he was arrested on suspicion of murder. He is in custody at a south London police station.

The deceased and the man arrested are believed to be known to each other. Police are not currently searching for anyone else in connection with this incident.

A crime scene is in place and an investigation is ongoing, led by Detective Chief Inspector Chris Wood. He said: “Our thoughts are with the victim at this very difficult time.

“We are in the early stages of our investigation and my team are working to establish what has happened here.

“Anyone who has information that could be useful to our investigation is asked to make contact with us.”

Anyone with information is asked to call 101, giving the reference 7874/14SEP. 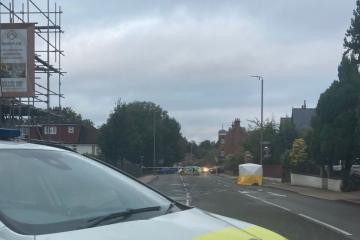 A man has appeared at the Old Bailey accused of killing his father in Bromley. Bristol – Metro …

Bromley residents have say they are “proud” and still “buzzing” for local girl Emma Raducanu one week on from her brilliant and historic tennis major win at the US Open. Bristol – Metro …

A man has been arrested on suspicion of murder after a 51-year-old was stabbed to death in Bromley last night. Bristol – Metro …

The latest case rates have been released for every local authority area in England and in most of them, infections are rising. Bristol – Metro …

Bromley teen Emma Raducanu had a flight home booked before the US Open proper had even begun, but the British teenager is now two victories away from one of the most extraordinary achievements in tennis history. Bristol – Metro …