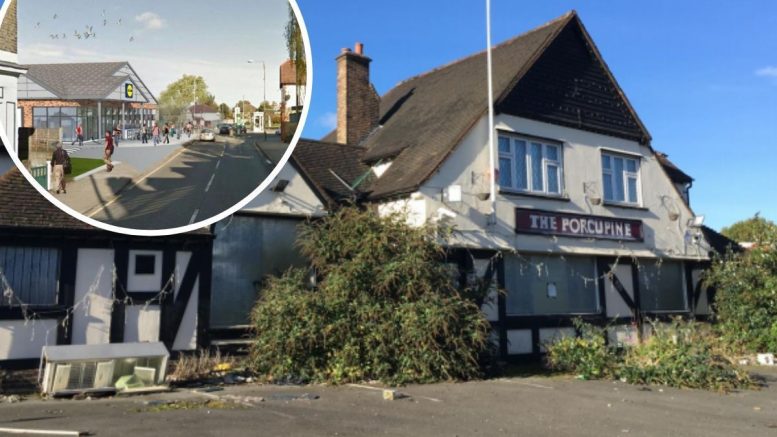 The porcupine is a hardy beast, endemic to some of the most rugged landscapes and inhospitable terrains that can be found across the world.

It’s a survivor – a trait it shares with its namesake pub, Mottingham’s Porcupine, which has again defied the odds to survive yet another attempt to have it bulldozed.

More than six years since Lidl’s first application for the site was rejected, the shopping giants failed to convince members that enough had been done to address traffic and safety issues on the busy Mottingham Road.

It required councillors to vote against council officers’ recommendations to approve the plans for the empty public house.

Addressing the meeting, local ward member David Cartwright – a long-time opponent of the scheme who has previously been scathing of the plans – said it still presented an “an unacceptable level of risk to members of the public”.

“More importance (has been) given to Lidl’s deliveries than pedestrians’ safety”, the Mottingham and Chislehurst North ward member claimed.

Delivery lorries would block off the busy road and require both lanes to access the supermarket’s car park, while a chunk of pavement across the road would have to be thinned to allow trucks to turn into the site.

“40-tonne juggernauts would have to use both sides of the roads every time they want to enter the site,” Cllr Cartwright told the meeting, saying the move presented a “significant reduction of safety standards”.

“Bromley planners must be unique across London and indeed the country in recommending at this time significantly reducing pavement widths alongside a very busy high street and shopping parade,” he added.

Fellow Tory councillor Simon Fawthrop acknowledged “there has been some improvements” on Lidl’s plans, but said the development would still present “such an over-intensification” that it would breach the council’s own planning guidance.

He suggested a small local shop with homes “on top” would be “far more acceptable on this plot”.

Chair of the committee, Alexa Michael, said in a statement after the meeting councillors “simply could not grant this application”.

“Our concerns about the physical road environment and busy traffic conditions with the consequent road safety problems have not been overcome,” she said.

“While it is accepted that the applicant has revised their proposal from the original application, the size of the store is significant when compared with the site itself. This intensification, combined with highway concerns, led to the application being rejected.”

Unoccupied since 2013, more than 330 responses objecting to the latest plans were received by the council.

The scheme has also been opposed by councillors across the borough border at Greenwich, as well as Tory MP Bob Neill, who earlier this year accused Lidl of purposely letting the site become run-down in order to improve their prospects of approval.

A decision was meant to be made in May this year but was deferred after last-minute Government guidance dictating how councils manage roads and footpaths was introduced in response to the Covid-19 pandemic.

An earlier application for a retail store with a larger retail shopping floor area was dismissed on appeal at a public inquiry in December 2014.

Representatives for the supermarket had previously said the proposal would create 40 new jobs, as well as bringing a vacant brownfield site back into use.

For now, it appears the saga involving the hardy beast of a pub will drag on into a new year.