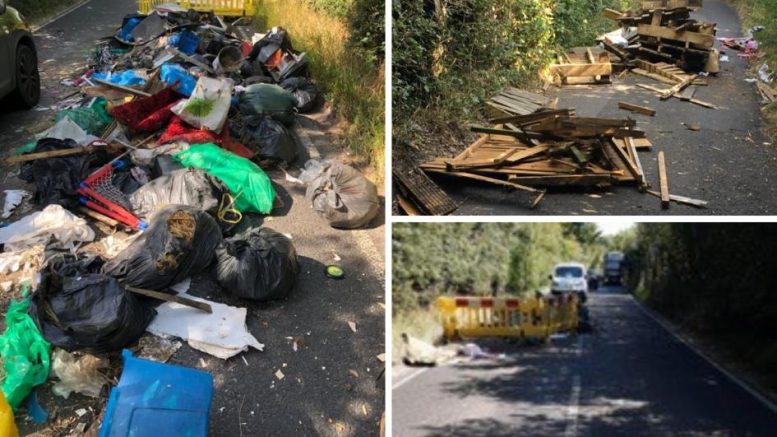 Rewards of up to £500 are available for information which leads to successful prosecution after serious fly-tipping incidents in Bromley.

The fly-tips were discovered in Shire Lane in Keston on Friday morning and Skibbs Lane in Orpington on Sunday morning.

They both caused major roadblocks in the country lanes – mostly or entirely blocking the road.

Skibbs Lane was mostly obstructed by wooden boards and pallets.

The tipping caused significant danger to road safety, obstructing over half, or all, the narrow country lanes.

Road users were forced to take evasive action to avoid the hazards – and in Shire Lane especially vehicles were left with no choice but to switch to the opposite lane to give way to oncoming traffic.

Anyone who needs to report an environment crime, including fly tipping, can do so on the Bromley Council website – with rewards of up to £500 available for information leading to prosecution.

Councillor Angela Page, Executive Councillor for Public Protection and Enforcement, said: “We investigate each and every fly-tip, with these incidents being particularly serious, but our clean-up team responded quickly and efficiently to restore the country lanes back to public use standard.

“If there is anyone who has any information about the fly-tipping, I would encourage them to share this information with the council in support of our investigation.”

Bromley Council is reminding people of the importance of checking whether tradespeople they employ have a waste carriers’ licence.

Checkout our latest breaks and local deals, which are a great alternative to airport chaos. From short stays at beautiful, relaxing locations…

Premier League Packages The new football season has just started and we’ve got some exciting news for all football fans, especially those…

Château de l’Hestrange   Wine Tasting with Friends! Wine tasting is considered to be a sophisticated past time for many people. Before you…